I Love This Game

In the November 2001 Venice Cup final, Germany trailed France by 47 IMPs starting the last set. In this book, world champion Sabine Auken tells the thrilling inside story of their comeback world title win, every bid and every card. She also uses each of the sixteen deals from that final session as a starting point for discussion, and distills from each of them general principles and advice that will help anyone looking to improve their own game. Among the topics covered here are the rationale for her own system agreements (the pros and cons of mini-notrump openings, multi-purpose two-bids, the merits of forcing club systems, etc.) and carding methods, as well as team chemistry, table presence and even dressing for success! 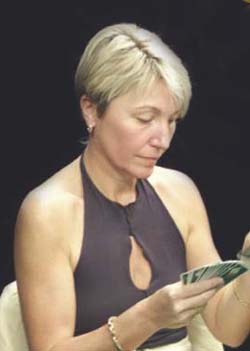 Sabine Auken lives in Denmark but still represents her native Germany in world competition. At one time the world's #1-ranked woman player, she has won three world titles and been a medalist in nine other world events.