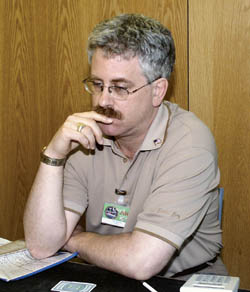 One of the finest books on advanced card-play that has ever been written. I would rank it alongside Reese’s great books Reese on Play and The Expert Game, and it contains considerably more than these two volumes put together. This book should open the eyes of the reader to some of the fantastic possibilities which can arise in this great game.

This is your chance to get inside the head of one of the great players of all time. That said, it’s not just for top-flight players. Just about anyone with a desire to improve and a willingness to work at the game can learn a lot through careful reading of this work. Rating: A+.

Rodwell has already added “support double”, “serious three notrump” and “last train” to the bridge lexicon. This work will add numerous others as well as standing on its own as one of the most important bridge books ever written.