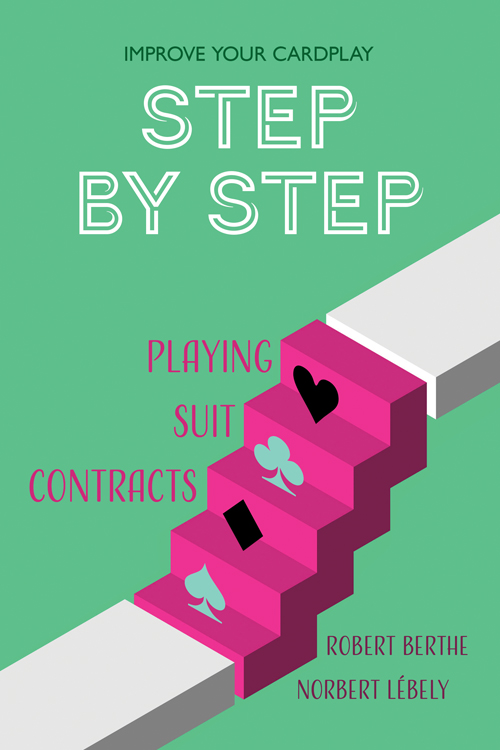 Forty years ago, in 1980, Robert Berthe and Norbert Lébely put the finishing touches on two books that would revolutionize the teaching of bridge cardplay: the first two books in the Step by Step series (Pas à Pas in the original French).

Based on an innovative yet clear and easily-understandable pedagogical approach involving the reader in a series of questions and answers, the series has allowed hundreds of thousands of readers over the years to absorb techniques known to be arduous and complex. Now available in English for the first time, this edition reflects the updates made by Lébely in 2020. He did the revision alone, as Robert Berthe had passed away in 2016.

Particular care has been taken with this revision of the second volume, which is devoted to play in suit contracts. Indeed, in the years since the original publication, the authors changed their minds on how best to teach declarer play when a trump suit is involved. They abandoned the traditional method of counting losers, which is difficult and not very intuitive, to focus on counting winners, much like the technique used at notrump. This innovative approach has resulted in a book which is a much-improved learning tool.

The first part of the book teaches the techniques by leading the reader step by step through a series of examples. The second part consists of problem deals where what has been learned can be applied and reinforced.

After their first meeting, at the Sarcelles Bridge Club, it became inevitable that the bridge writer, Robert Berthe, and the professional teacher, Norbert Lébely, would collaborate on books for teaching bridge. The result was Pas à Pas, a series which in its original form has sold more than 300,000 copies in France.